Welcome to the COFR wiki!
The database of the Confederacy of Free Regions that anyone can edit

From the battlefields in Hiigara to the colonies of the Diesmaran Empire, from the Palaces of the Shalman Commonwealth to the fashion districts of Hypertrophy, the nations of the Confederacy of Free Regions are, to say the least, unique to themselves. But being unique is what brings us together, and with the help from the leaders and the people, we are united under one banner. COFR: A different union, a unique union.

Founded by the representatives of the great nation of Hiigara, COFR is a different union with different options. We unite but respect each other's differences; we understand the individual needs of all our members; we welcome the new; and we keep the old. What sets us apart from other unions you may ask? Well, positively just about everything.

Join us today! Do you have a country-based city journal that you want to get involved with other nations, participate in media such as news and television, and enjoy role-playing with some very welcoming people? Then the Confederacy of Free Regions is for you! To join us, visit our forums here and sign up, then set up an application in our "New Members" section.
Main Article: here.

Our newest member is the Ossil! Ossil is a country located in North America. It is a country that has style, business and tourism, not to mention an interesting artistic background too!


Organs of the COFR!

The Assembly of Nations
The place where every COFR nation has a voice!

The Confederal Union of Trade and the Trade Union Bank
The alliance of COFR companies and the bank that controls the enieo, the COFR's single currency!

The Singasong Contest
A song contest for COFR members only!

The Amazing COFR Race
The COFR version of the popular The Amazing Race.

The COFRtv
An alliance of COFR TV stations!

The Sky Captain Alliance
An airline alliance for COFR airlines!

The Inter-Union Games
A major sporting event all members of the COFR and Scandia Union can partcipate in.

The Spacefleet Command and the COFR Peacekeeping Forces
The COFR military!

The Stock Exchange Corporations
An alliance of COFR stock exchanges!

The Environmental Protection Union
The EPU's main objective is to make the Earth and other COFR planets a better place to live in!

What's new in the Confederacy of Free Regions

To write a new article, just enter the article title in the box below.

Not sure where to start?

The Singasong contest is a contest where all members of the Confederacy of Free Regions get together in a unique atmosphere. Each nation submits a song, most of the times in their official language, and then all members compete for the title of the best song! The 6th Singasong will take place in November in Salonique, Shalman Commonwealth. More here!

Map of the Member-Nations of the COFR. Planetary Nations are not included. 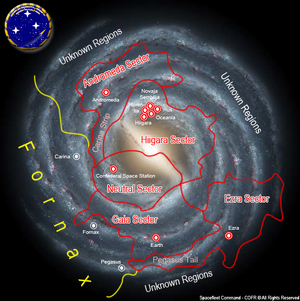 Recent Acts presented at the AON

Members of the Assembly of Nations (AON):

Overall AON members at the moment: 64 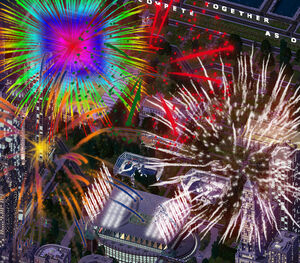 Fireworks during the spectacular opening of the 42nd PanAndromedan Games in Ylmeria, Shalman Commonwealth.

Community content is available under CC-BY-SA unless otherwise noted.
Advertisement